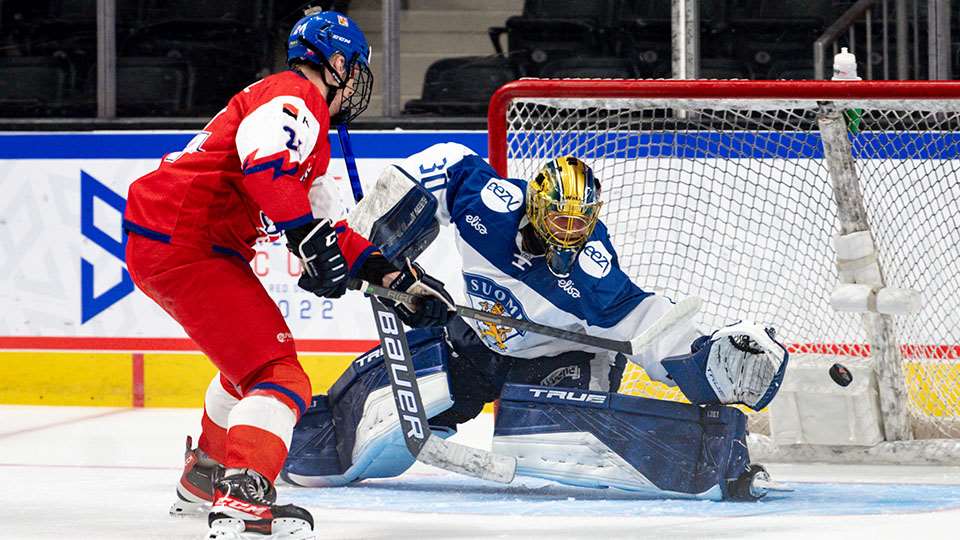 RED DEER, Alta. – Jakub Stancl scored the tying goal for Finland with just 33 seconds left to send it into extra time, but two shootout goals from Eduard Sale propelled Czechia to a 4-3 shootout win over Finland in the preliminary-round opener for both at the Hlinka Gretzky Cup.

Czechia opened the scoring early with a shorthanded marker just 2:36 into the game. Jan Šprynar forced a turnover in the offensive zone before feeding a no-look pass to Jakub Štancl for the finish.

The Finns pressed for an equalizer but Czech goaltender, Michael Hrabal, turned away all 10 shots faced in the first. The 6-foot-6 netminder finished the game with 33 saves.

In the second, Adam Zidlicky snuck one past Finnish goaltender Petteri Rimpinen after a two-on-one break to extend the Czech lead to two. Finland fought back on a late period power play with Kasper Halttunen wiring home a one-timer from the top of the face-off circle to make it 2-1 after 40 minutes.

Kalle Kangas floated a shot through traffic to the game for Finland at the beginning of the third to set up a wild finish. Joona Saarelainen scored what appeared to be the game-winner midway through the period but Stancl counted late to force overtime.

After a scoreless overtime, the stalemate continued through the shootout, with Salé finally scoring the deciding goal in the sixth round.