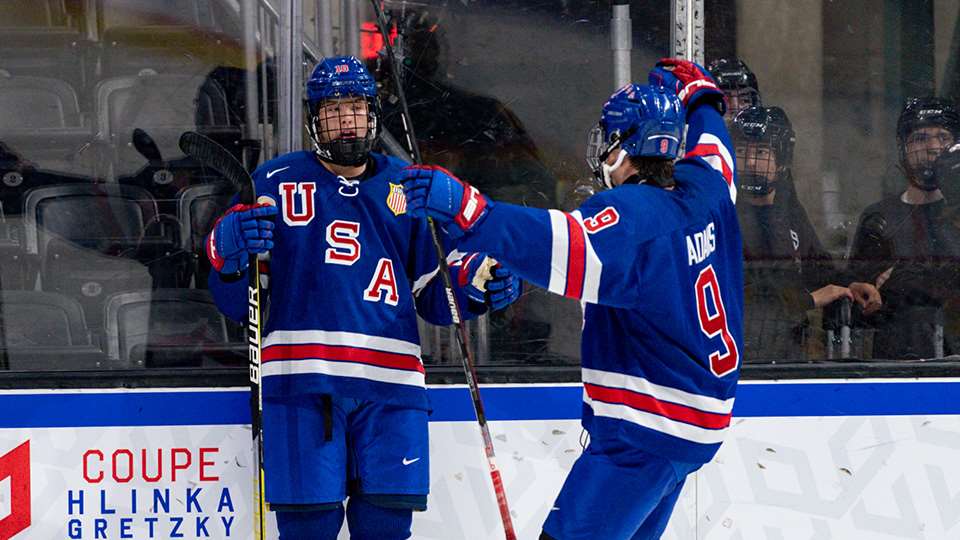 Whitelaw and Strathman posted three-point games as the U.S. earned its first win

()
United States 8 – Germany 1
RED DEER, Alta. – Will Whitelaw and Andrew Strathman both finished with three points and the United States went 3-for-6 on the power play in an 8-1 win over Germany in prelimary-round action Sunday at the 2022 Hlinka Gretzky Cup.

The U.S. opened scoring early with a quick unassisted score from Whitelaw, his first of two on the night. Carey Terrance extended the lead just minutes later to make it 2-0 after 20 minutes of play.

Joe Connor capitalized on a German penalty early in the second to extend the Americans' lead. Joe Gramer added another, but German special teams came up big as Linus Brendl scored a shorthanded goal to cut into the U.S. lead.

Will McDonagh, Strathman and Griffen Erdman added goals before Whitelaw tallied his second of the night late in the third period.

German goaltenders Nico Petuch and Dean Doge combined for 41 saves while Calvin Vachon allowed one goal on 14 shots in the U.S. net.

The Americans will be back in action on Monday against Finland (3 p.m. MT), while the Germans play in primetime against Czechia on Monday evening (7 p.m. MT).